Formed in 2016, Solomon are a Southampton based group playing powerful new soulful folk-rock.

Originally, formed at the acclaimed Railway Inn, Winchester as a music collective, Solomon spent the summer playing gigs and festivals in the city and across the South of England. With songs reflective of our times, Solomon’s early lyrics had a strong focus towards messages of social justice and freedom – of peace, hope and change. 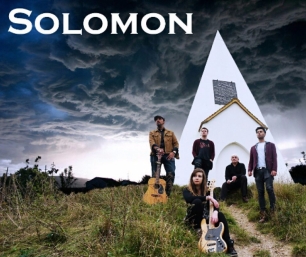 During the Winchester period for Solomon, the sound was grounded in n­ew blues-folk with powerful lyrics and hauntin­g melodies revolving around plucking styles, blended with the harmonica, a blues lead guitar and drum. The Solom­on sound developed as the band went on it’s journey.

In the summer of 2016, a new line up change saw the band move to Southampton, and become a strong and well-supported part of the city’s music scene.

Light Over Dark was Solomon’s launch event, supported by special guests on stage including DD Allen, Jimmie Chills and blues legend Dave Evans and his Headhunters, for a night of celebration, ideas on shaping the world and bringing people closer together – or light to overcome the dark.

#WhiteRibbon – men a­­­­­­gainst domestic ­v­i­o­l­e­nce and hom­op­ho­bi­a,­ which seeks to educate young men on their attitudes towards women and stop the cycles of violence in society. You can find out more at www.whiteribboncampaign.co.uk

#1BlueString – a US-based music charity being brought over to the UK by Guardian journalist Ally Fogg, highlighting the 1 in 6 men who suffer sexual abuse and domestic violence. You can find out more at www.1bluestring.org and www.survivorsmanchester.org.uk

In 2017, a deal was struck to provide Solomon with their own rehearsal space and permanent home at “The Loft”, one of Southampton’s hottest music venues.

Solomon now host one of the South’s best monthly new music showcases at “The Social” in Southampton on the first Wednesday of every month, supporting local artists and bands.

With a growing set of supporters including Travis’ Fran Healy, Sanjeev Bhakskar and Radio 2’s Bob Harris (who calls the music “delicately powerful”) Solomon have an all new line up and a fresh sound which reaches out to fans old and new. Join Solomon on their journey to create a small slice of peace, hope and change in the world.